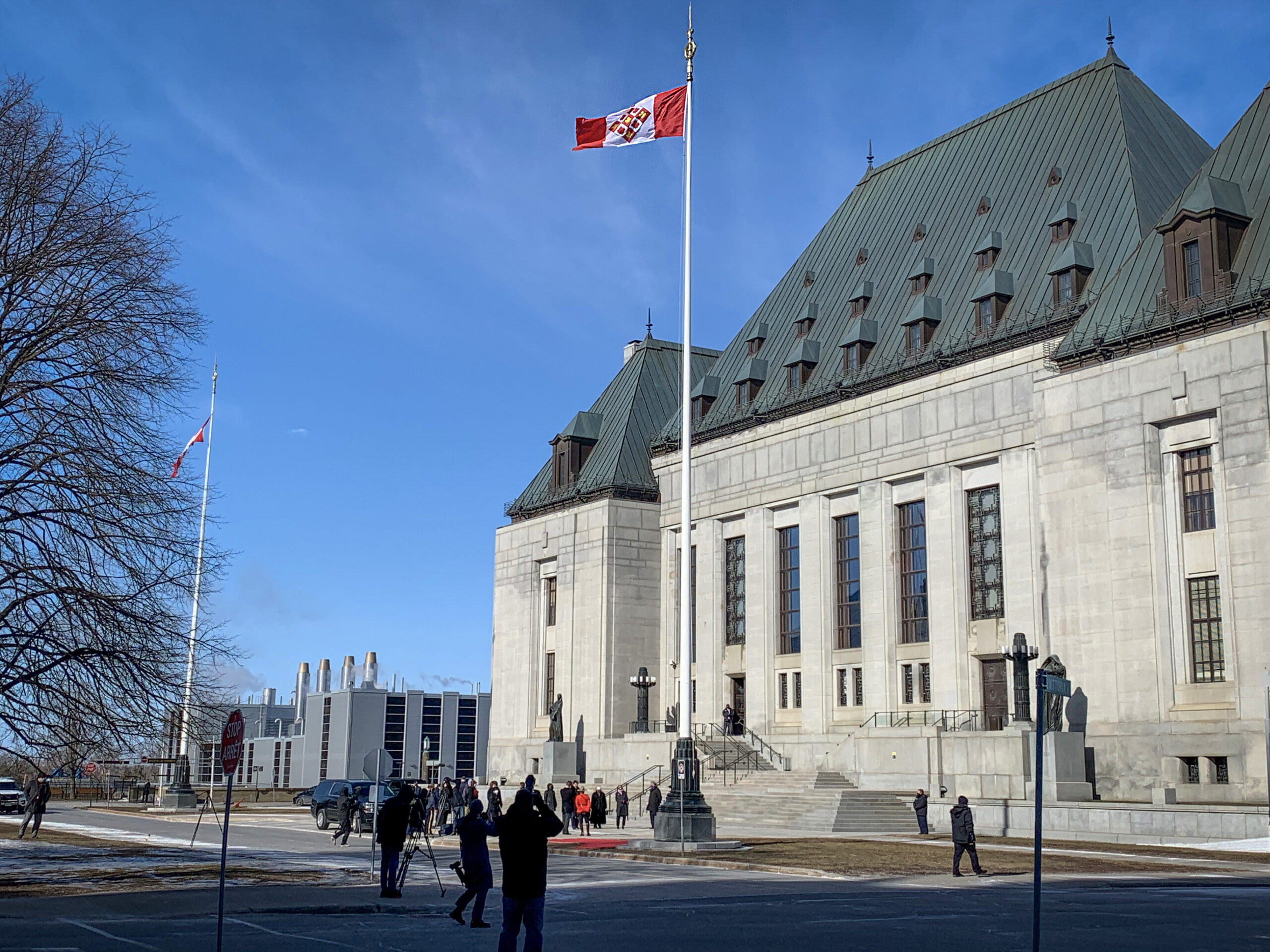 Environment Journal recently seized the opportunity to observe some of the best legal minds in the country mentor the next generation of environmental lawyers at the Willms & Shier Environmental Law Moot — Canada’s first and only national moot court competition devoted to environmental law.

The goal of the moot is to promote awareness of the growing role environmental issues play in contemporary legal practice and public life, while enhancing law students’ written and oral advocacy skills. The biannual competition takes the form of an appeal before a Canadian court, bringing together law students, judges, leadings lawyers and legal academics to explore cutting-edge environmental law issues. The competition is open to teams from all Canadian law faculties.

The moot problem this year was the appeal of the Supreme Court of Canada’s decision regarding the Greenhouse Gas Pollution Pricing Act (GGPPA).

Overview of the provincial governments’ positions included the following:

Moot co-chair Marc McAree, a Certified Specialist of Environmental Law and partner at Willms & Shier, enthusiastically welcomed attendees from 16 teams competing from law schools across Canada for the two-day competition culminating with the final teams competing in the final round before Supreme Court of Canada judges. 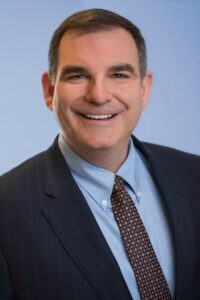 “This moot is about students aspiring to be lawyers, and for many of you that aspiration may well extend to be litigators. I know you have spent many hours reading, formulating arguments, maybe even practice in front of your cats or dogs. Getting to the point where you know your brief inside and out,” said McAree. “Regardless of the outcome of the moot, you are all winners.”

“Congratulate yourselves on having the effort and having the courage to argue not just one but both sides of this case before leading environmental practitioners from across Canada and later before real judges takes commitment and nerves of steel. And to top it off, the environmental law moot committee threw at you a very complex case that you have each digested: three courts of appeal decisions that cut in different ways plus the Supreme Court of Canada decisions. That’s no small task.”

McAree emphasized the key benefits of the competition, including the opportunity to get a taste of litigation and to have valuable guidance in the career of law.

“You have chosen a most honourable profession and one that offers a tremendous amount of value to society. After all, what is there in our society that is more fundamental than the rule of law? Our profession offers much opportunity for personal growth and at the same time an opportunity to make a real difference,” he stated. 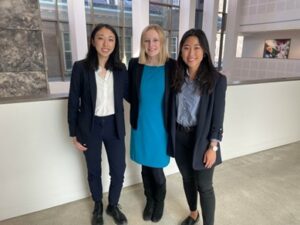 Moot participants from left to right Lauren Yan Lin Cao, Jane Fallis Cooper, and Gina Kwon.
“We respectfully ask you to dismiss this appeal, because the GGPPA is constitutional in its entirety. I will address Parliament’s jurisdiction under the National Concern doctrine of its POGG power,” said competitor Lauren Cao. “Justices, we are faced with an extremely urgent crisis. That of climate change, but we must tackle it while respecting the framework of the Constitution. And Parliament has done exactly that. It has enacted a legislation, the GGPPA, that aims to tackle climate change using carbon pricing, which is one of the most effective tools, as demonstrated by science.” Credit: Rachel Allen.

McAree also shared a heart-warming story from the previous moot competition. The committee had received an urgent text regarding one of two students at University of Victoria team being instructed not to travel at the last minute due to illness. The coach asked if there was another team that would share a mooter. The team learned through various inquiries that the University of Saskatchewan team was willing to loan a student.

“Surprising in some respects and not surprising in other respects,” recalled McAree. “The preliminary rounds proceeded and both University of Victoria and USask go forward into semi final rounds. As it turns out, they were not going to face each other head-to-head.”

USask, having displayed incredible humility and sportsmanship, went on through the semi-finals and into the finals and they won the 2019 environmental law moot court competition.

“Not only is the competition about giving experiences, but also about demonstrating humanity and what good sports we can be while simultaneously and concurrently competing with one another.”

How is the focus and the structure of the event decided? The moot committee debates on the cases to cover and the rules. The committee clearly includes a tremendously dedicated community of lawyers with an unwavering commitment to volunteerism and steadfast dedication to the community.

The factum Judges this year were Lisa DeMarco, senior partner and CEO at Resilient LLP, Theresa McClenaghan, executive director and counsel at the Canadian Environmental Law Association, and Sébastien Jodoin, association professor and Canada Research chair in Human Rights, Health, and the Environment at the McGill Faculty of Law.

Moot co-chairs Marc McAree of Willms & Shier Environmental Lawyers LLP and Stepan Wood of the Peter A. Allard School of Law at The University of British Columbia. The lawyers were classmates at Osgoode Hall Law School.

McAree credited the virtual nature of the moot for allowing this edition to include volunteers from across the country. The moot team includes dozens of esteemed environmental lawyers, timekeepers, bailiffs and technicians, as well as scorekeepers. 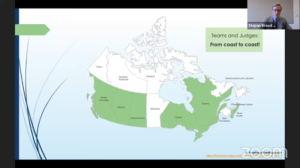 Geographic representation of teams and judges from coast to coast. The moot team by the numbers: 64 volunteers, 40 competitors, 17 sponsors, 16 teams, 2.5 persons per team, and two coaches per team for a total of 32. Therefore, it took 169 people to make this moot happen in 2022.

“The vast majority of environmental lawyers are salt of the earth and are trying to do the right thing, not just for their careers but for their environment. We don’t make the law, but we try to ensure that our clients comply. Having been an environmental lawyer for a while now, I think the vast majority of our clients are trying to do the right thing. Our colleagues at the bar don’t always agree with me,” joked McAree.

Among the innovations Chief Justice Wagner introduced to the court are fully virtual hearings, which have quickly become the norm and will continue, the institution of annual press conferences, and the launching of the court’s year in review, during which he makes sure the case summaries are written in plain language to make them more accessible. 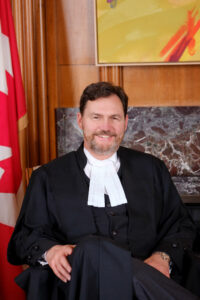 The keynote speaker, The Right Honorable Richard Wagner, is the 18th Chief Justice of Canada. In this prestigious role, he presides over the Canadian Judicial Council, National Judicial Institute and chairs the Advisory Council for the Order of Canada.  Chief Justice Wagner is currently president of the Association des Cours Constitutionelles Francophones. In 2021, he also fulfilled his duty to serve as administrator of the Government of Canada. Credit: Supreme Court of Canada.

In his keynote address, Chief Justice Wagner set out that climate change poses a grave threat to the future of humanity, echoing the wording found in the Court’s decision. Those words were some of the most popular from the Supreme Court ruling, which received extensive media coverage.

Chief Justice Wagner said he was just 26 years old when he first argued a case before the Supreme Court, and mused that an environmental case capturing the attention of the nation would have been hard to imagine back then.

How exactly does a lawyer prepare for such a case? How does you convince the judge that your point of view is worth adopting?

He made some key recommendations on the power of preparation. First, carefully assemble the opening statement; it should be articulated in one clear sentence. Second, strategically lead from point A to point B until you get to your conclusion. Third, memorize your opening statement and roadmap so you will feel more confident. Fourth, practice and keep in mind that something written down sounds different when it’s spoken aloud.

Finally, he added that the most successful lawyers help the judge along. Clear and compelling explanations of the issues help judges to formulate clear decisions. 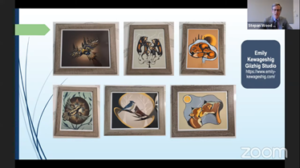 This year’s awards are artwork by the talented Anishnaabe artist Emily Kewageshig. Her work can be viewed here. 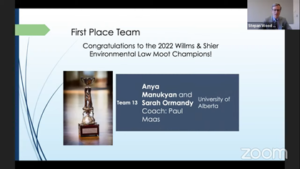 The championship trophy presented to the first-place team is made of sustainable wood and reclaimed antiques by Jamie Brick, award-winning artist. His work can be viewed here.

The next environmental law moot will be held in 2024.

Brownie Awards 2022: Finalists revealed, featuring projects from across the country