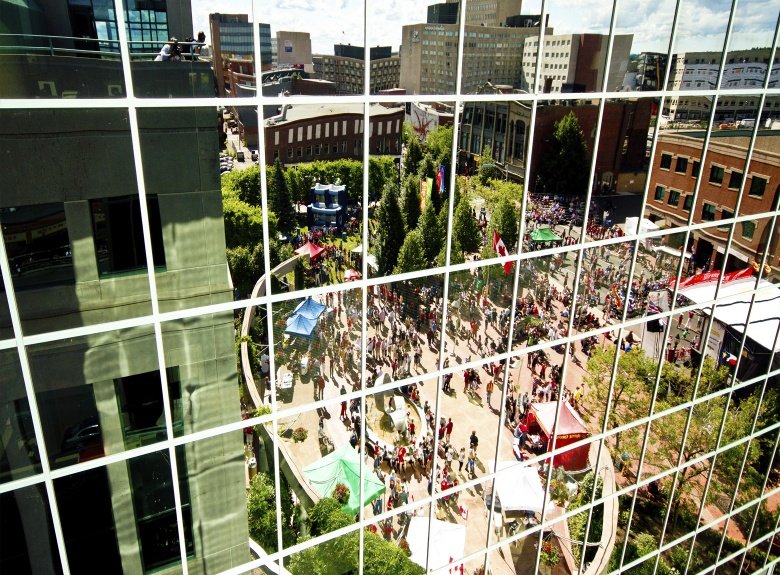 “We were hit hard,” he says. They spent the night evacuating a campground, removing trees from roads, and dealing with general flooding. All hands on deck. “We had to get everyone who could get to work to come in.”

They’re also at max capacity early each year, when winter rainstorms fall on frozen landscapes incapable of absorbing water, causing flash flooding, an annual headache but a fairly recent phenomenon. “We needed to get organized, put a plan in place, some human resources and funding against climate change,” says Dallaire.

The Association of Francophone Municipalities of New Brunswick (AFMNB) was keen to help. It had been working with the Federation of Canadian Municipalities, Local Governments for Sustainability Canada (ICLEI), Partners for Climate Protection, and QUEST Canada to strategize on enabling municipalities to measure and reduce GHG emissions.

AFMNB works with members to develop their community energy plans. Projects vary widely, but are tailored to each municipality’s needs. Progress has been quick and significant. Several municipalities have achieved key milestones in implementing and monitoring greenhouse gas (GHG) reductions.

This progress is important because municipalities set the tone for climate action. According to Partners for Climate Protection, municipalities have influence over more than 50 per cent of greenhouse-gas emissions. In all, more than 350 municipalities across Canada are working through FCM and ICLEI to reduce emissions.

“The most important thing is to be simple,” says Joël Olivier, director of member services at AFMNB. “Municipalities have responded very well. They’re committed to being leaders on climate change and we help make that achievable.”

The process begins with a reflection on what the municipality wants to achieve. An analysis of emissions follows—where is the government spending heavily on energy use, how are they using resources, and where are the inefficiencies? What can be addressed with better efficiency and where are investments needed in solar or biomass (creating energy by burning the forestry industry’s waste products)?

Olivier says once a municipality takes a specific action, it becomes easy to replicate in other places. For example, he’s worked with four municipalities that have identified biomass energy as a way to reduce emissions, replacing traditional fuel sources like propane or oil, using materials that have traditionally been discarded.

The next step is creating a carefully laid out plan with short, medium and long-term actions. The biggest challenge small municipalities face is a lack of human resources. There aren’t enough people around with expertise in energy use and emissions measurement.

By connecting its members with that expertise, AFMNB shows the potential for not only emissions reductions, but also financial and social benefits. Replacing a heating system at an old arena requires a large investment, but it pays for itself many times over with reduced costs in heating and lighting.

In all, Olivier says the process of creating and implementing GHG reduction plans takes about 10 years, but improvement doesn’t stop there. Once a fuel source is changed, or a facility is made more energy-efficient, it becomes easy to replicate at other facilities. “It can continue, grow and reproduce once you have techniques. It’s a very simple approach.”

That simplicity gave Dallaire confidence in approaching Cap-Pelé’s municipal council recommending an extensive renovation project for a community landmark, l’Arena de Cap-Pelé. His funding ask was $3,000, far less than it would have been without FCM funding that AFMNB helped him access.

“If we had been alone, it would have been $75,000 to $100,000,” Dallaire says. “This was an easy sell to council and the public. QUEST and the association did a great job with our plan. It’s easy to understand, easily readable and actionable.”

The plan identifies several old, energy-inefficient buildings. The arena, which was built in the 1970s, is the largest, and a vital community hub, where all generations gather throughout winter. A straightforward but important initiative is updating the lighting to more efficient LED systems. 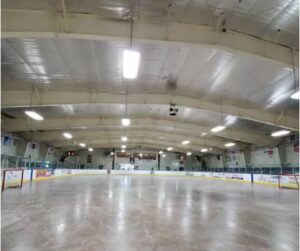 An important initiative for the Lumieres arena is to upgrade the lighting to more efficiency LED systems and install a compressed-air heat recovery system. Credit: QUEST Canada.

They will also install a compressed-air heat recovery system. “Right now we push hot air out of the arena,” explains Dallaire. “The new system will recuperate that heat and use it.”

“We’re also looking at a solar carport,” he adds. This would allow residents to charge up their own electric vehicles using a solar-powered facility. The idea is modelled after the one in Petit-Rocher, the result of another AFMNB initiative. Dallaire believes a visible solar-powered electric vehicle charging station would encourage citizens to be part of climate solutions. 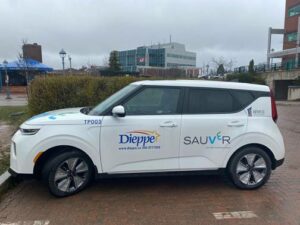 The Municipality of Dieppe is working with the AFMNB’s electric vehicle program, SAUVeR, in cooperation with four municipalities, including Beresford, Saint-Quentin, Shippagan, and Tracadie. Credit: Quest Canada.

Bordering on the City of Moncton, Dieppe is a municipality with about 25,000 residents. It has worked with the AFMNB’s electric vehicle program, SAUVeR, in cooperation with four municipalities including Beresford, Saint-Quentin, Shippagan, and Tracadie.

“We created an inventory, made an action plan, implemented it, and will report on it,” says Alexandre Girard, Dieppe’s urban planner. “We did feasibility studies, looked at how our municipal fleet of vehicles was being used, how many we were using, at what capacity they were being used.”

Dieppe focused on its vehicles and facilities, and integrated its plans, with a new charging station set for the AJL Arena, a large multi-purpose community hotspot. Another feasibility study showed the municipality could cut emissions and energy costs by 37 per cent upgrading the arena to use LED lighting, solar panels, and Air Curtain heat compressors.

The $95,000 in operational savings will create a funding surplus to be applied to future greening projects. A hub of four EV charging stations was installed at the UNIplex, with one more installed at City Hall, giving municipal employees access.

Each employee at City Hall who wanted to use the vehicle could have access to a fob key and use an app to schedule vehicles. The charging stations are free for public use.

Francophone municipalities are eager to work with AFMNB because they know residents and businesses count on government to lead the fight against climate change. “We need to give an example,” Olivier says. “In 2022, it’s just common sense to work on this.”

Chris Benjamin is a journalist, editor and author. His book Eco-Innovators: Sustainability in Atlantic Canada, won the Best Atlantic-Published Book Award and was a finalist for the Evelyn Richardson Non-Fiction Award.