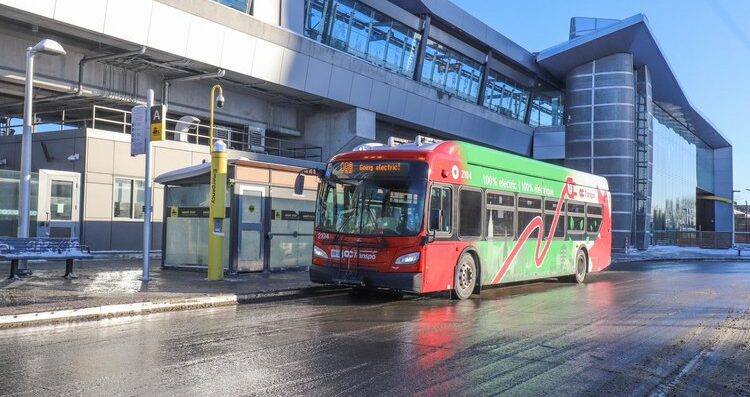 The Canada Infrastructure Bank (CIB) has achieved financial close on an investment of up to $380 million with the City of Ottawa to help finance up to an additional 446 Ottawa-Carleton Regional Transit Commission (OC Transpo) zero-emission buses (ZEBs) through 2027.

The CIB’s loan will contribute towards the upfront capital cost of the battery-electric buses, which will help accelerate the electrification of OC Transpo’s bus fleet. This is one of the largest increases of emissions free transit vehicles in Canada.

OC Transpo welcomed its first four new 40-foot battery-electric buses into service in early 2022 and, thanks in part to CIB funding, is seeking to add 26 more in 2023, and another 420 by the end of 2027. With the gradual phase-out of diesel buses as they reach the end of their life cycle, OC Transpo could achieve a fully zero-emission bus fleet by 2036.

The electrification of vehicles is a key initiative to help the City of Ottawa’s goal of reducing GHG emissions in City operations by 100 per cent by 2040 and demonstrates the City’s commitment to lead by example.

“Transportation accounted for 42 per cent of GHG emissions in Ottawa in 2020, which is why our commitment to converting all buses to electric over the next 15 years is a key pillar to Energy Evolution: Ottawa’s Community Energy Transition Strategy,” said Jim Watson, Mayor of Ottawa. “Municipalities are on the front lines of climate change impacts and this CIB investment allows Ottawa to take a leadership role in implementing community GHG reductions.”

Consistent with the CIB’s ZEB initiative, repayment of the investment is expected to be covered through the anticipated reduced operating costs over the life of the ZEBs as compared to diesel buses.

“I am delighted our investment to support the City of Ottawa’s transition to a fleet of 446 zero-emission buses has achieved financial close,” said Ehren Cory, CEO of CIB. “Our partnership will help the City meet its climate targets and provide cleaner public transportation for future generations. This is a tremendous opportunity to modernize municipal infrastructure and support a greener community.”

Energy supply and charging infrastructure will be supplied by Hydro Ottawa through a separate agreement with the City.

ZEBs can improve the quality of life for users who will benefit from a cleaner, quieter commuting option, which also protects the environment. In addition to offering a quieter ride, the average diesel consumption reduction per bus is estimated at 35,000 litres of fuel every year and the 446 ZEBs are estimated to save approximately 38,500 tonnes of GHGs annually.

Converting from diesel-powered vehicles to electric is also a key component of the City of Ottawa’s Climate Change Master Plan, the city’s overarching framework to reduce greenhouse gas emissions and respond to the current and future effects of climate change.

To date, the CIB has committed more than $1.3 billion towards more than 5,000 ZEBs across Canada. The CIB seeks to invest up to $5 billion into public transit projects that are in the public interest and support Canadian sustainable economic growth.

Ports of Halifax and Hamburg working to decarbonize shipping corridor