The 2021 Provincial Energy Efficiency Scorecard demonstrates a Canada-wide 38 per cent drop in savings from energy efficiency programs. The report calls for more strategic leadership from the federal government to combat the downward trend in energy savings.

“Canada is coming out of the COP26 Climate Summit with the resolve to reach net-zero emissions. The Scorecard is a tool for policymakers and advocates to benchmark performance and review best practice policies. Unfortunately the data shows that provincial energy efficiency progress is stalling,” said the report’s lead author, James Gaede. 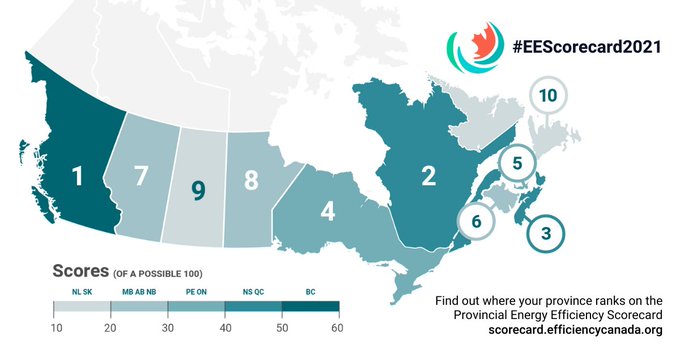 COVID-19 related factors such as supply chain disruptions, contractor shortages, and interruptions caused by pandemic-related restrictions challenged program administrators in meeting budget and savings targets. However, according to the researchers, it is policy changes such as Ontario’s cancellation of residential electricity energy saving programs and the shut-down of Energy Efficiency Alberta that explains a downward trend in annual incremental energy savings amounting to roughly 38 per cent since 2017.

The scorecard gave the top rank to British Columbia for the third year in a row. The province is one of the few that managed to hit savings and spending targets in 2020, despite the pandemic. B.C. also led the country in the percentage of vehicle sales that were electric or plug-in hybrid (8.4 per cent) in 2020 and remains the only province with a commitment to a net-zero emissions code for new buildings.

Quebec maintains its second place position, leading in the transportation category with the most comprehensive charging network in Canada and a plan to eliminate the sale of fossil fuel passenger vehicles by 2035.

Newfoundland and Labrador fell below Saskatchewan into last place. However, the province has plans to promote greater electrification of transportation, while maintaining energy efficiency programs, which should result in energy efficiency policy improvements.

The rankings of Nova Scotia, Ontario, and Prince Edward Island remained the same, from the previous year’s rankings. PEI achieves top scores in fossil fuel savings and spending per capita, as well as investments in low-income energy efficiency. While Ontario leads the nation in grid modernization, budget caps directed by the provincial government have reduced energy savings and had a big national impact.

The results demonstrate that all provinces have significant room to improve. On a scale with 100 available points, the highest score this year is 55 and the lowest 13.

They note that energy efficiency is a policy area that should unite all provinces rather than creating regional conflicts.

“Cutting energy waste is the first chapter in Canada’s climate plan and we have seen new federal policy initiatives over the past year. However, some of the stalling at the provincial level is due to federal delays in areas like publishing national model building codes. With a new mandate to aggressively reduce emissions there is an opportunity for federal policy to complement and accelerate provincial action,” said Brendan Haley, policy director at Efficiency Canada.

Investments for energy-efficient buildings in B.C.