On April 27 at Queen’s Park, a broad coalition of more than 125 groups from across Ontario, representing more than 475,000 people, launched the Ontario Climate Emergency Campaign (OCEC) that calls on all candidates in the upcoming Ontario provincial election to treat climate change as the emergency it is.

As part of the campaign, environmental groups, health groups, businesses and others are calling on all provincial election candidates to commit to a climate action plan that includes setting binding climate targets consistent with global efforts to limit planetary warming to 1.5 C; investing in a thriving, regenerative, zero emissions economy; and prioritizing and respecting Indigenous sovereignty and autonomy.

The non-partisan campaign promotes climate policy as the top voting priority and an urgent Climate Action Plan of evidence-based and extensively scoped climate policy for the next provincial government.

The OCEC has been endorsed by Dr. David Suzuki and Severn Cullis-Suzuki as per this video.

“We are failing to reach our critical climate targets. Yet all the solutions we need are already available!” said OCEC Co-Chair Mili Roy. “This campaign empowers every Ontarian to vote for urgent climate action and hold our next government accountable. Our future depends on it like never before.”

Acknowledging the Code Red for humanity declared by the Intergovernmental Panel on Climate Change and the closing window in which to enact impactful positive change, the OCEC is holding the Government of Ontario accountable to the following Climate Action Plan.

The organization is calling for these actions to be embedded in legislation to ensure accountability, transparency and inclusion, with periodic mandated public reporting on all measurable outcomes:

1. Set binding climate targets based on science and justice consistent with global efforts to limit planetary warming to 1.5C.

Set binding greenhouse gas emissions reduction targets relative to 2005 levels of 30% by 2025; 60% by 2030; and 100% by 2040. Establish rolling five-year carbon budgets that decline over time towards zero emissions by 2040 or sooner. Review and update targets regularly as climate science evolves. Track and report progress on these actions every year.

Build a new relationship between the Province of Ontario and Indigenous peoples premised on the United Nations Declaration on the Rights of Indigenous Peoples (UNDRIP). Recognize and respect Indigenous peoples’ jurisdiction and right to free, prior, and informed consent within their territories. Collaborate in true partnership with Indigenous peoples on shared climate priorities, recognizing that spiritual value of the land is reflected in Indigenous culture with a commitment to respecting Mother Earth.

Invest 2% of Ontario’s GDP to advance the zero emissions, decarbonized, renewable economy and create many thousands of decent, secure, sustainable jobs across multiple sectors. Create new economic and public institutions, diverting monies from destructive fossil fuels, and spend what it takes to immediately reduce greenhouse gas emissions. Do so recognizing that the cost of inaction will massively outweigh the cost of immediate urgent climate action. Regulate and support governmental holdings to rapidly divest from fossil fuel exposure, and businesses to decarbonize while promoting green manufacturing.

Phase out gas-fired electricity by 2030. Redirect funding to energy efficiency and fully renewable low carbon energy sources. End all fossil fuel subsidies, tax and financial incentives immediately. Ensure that all high emitting industries and sectors that create or profit from fossil fuel pollution pay their fair share of the costs of the resulting climate damage. Place an immediate moratorium on any further investment in nuclear energy to invest instead in new renewable energy.

5. Prioritize public health as the climate crisis is our single greatest health crisis.

Recognize that climate change is the single greatest health threat of this century and taking climate action is our greatest health opportunity. Invest in sustainable, equitable, and accessible healthcare. Incorporate Health in All Policies, One Health tenets, and Wellbeing Economy indicators into all future policy decisions, moving beyond economic evaluations and GDP-based measures.

Establish and implement stringent net-zero emissions building codes on all new builds by 2025 including elimination of fossil fuel based heating, while incentivizing deep retrofits for existing buildings to achieve net-zero emissions and inclusive affordable housing with low energy costs. Ban new gas connections by the end of 2023. Create a Crown Corporation to mobilize the workforce for the sustainable employment opportunities that will be generated.

Support and invest in Indigenous-led conservation initiatives. Restore natural ecosystems functions, preserve biodiversity, and increase carbon sequestration, including important carbon sinks such as the Greenbelt, the boreal forests of northern Ontario, and the James Bay lowlands, thereby improving human and ecosystem resilience to climate impacts. Protection must include at least 30% by 2030 of forests, wetlands, greenspaces and fresh water including our Great Lakes and other sources of drinking water. Restore powers and funding to Conservation Authorities.

10. Institute a broad public education campaign, as we all have the right to know what’s at stake.

Tell the truth about the climate and biodiversity crises and their critical impacts on human survival, in order to educate and mobilize broad community-based and societal action. Recognize climate change as the single greatest threat to human health of our time. Highlight the multiple co-benefits and massive opportunities that will result from taking climate action, including health and economic benefits, as well as employment opportunities.

11. Reinstate an independent office of the Environmental Commissioner.

Empower and adequately fund the Environmental Commissioner on an ongoing basis to independently oversee the implementation of the essential environmental actions to be taken.

As we make the massive and urgent transformations critically needed to secure our shared future, ensure a just transition for Indigenous, resource-dependent, remote, and marginalized communities, low income families, fossil fuel workers, and all others disproportionately affected by the necessary shift to a low carbon economy. Prepare our communities for the impacts of the climate crisis to minimize human suffering and infrastructure damage. Address environmental racism and intergenerational justice by supporting those most vulnerable to climate change impacts including future generations. Recognize that our only way forward is to act together urgently, collectively, massively to safeguard the present and secure the future for ourselves, our children, and for generations yet to come. 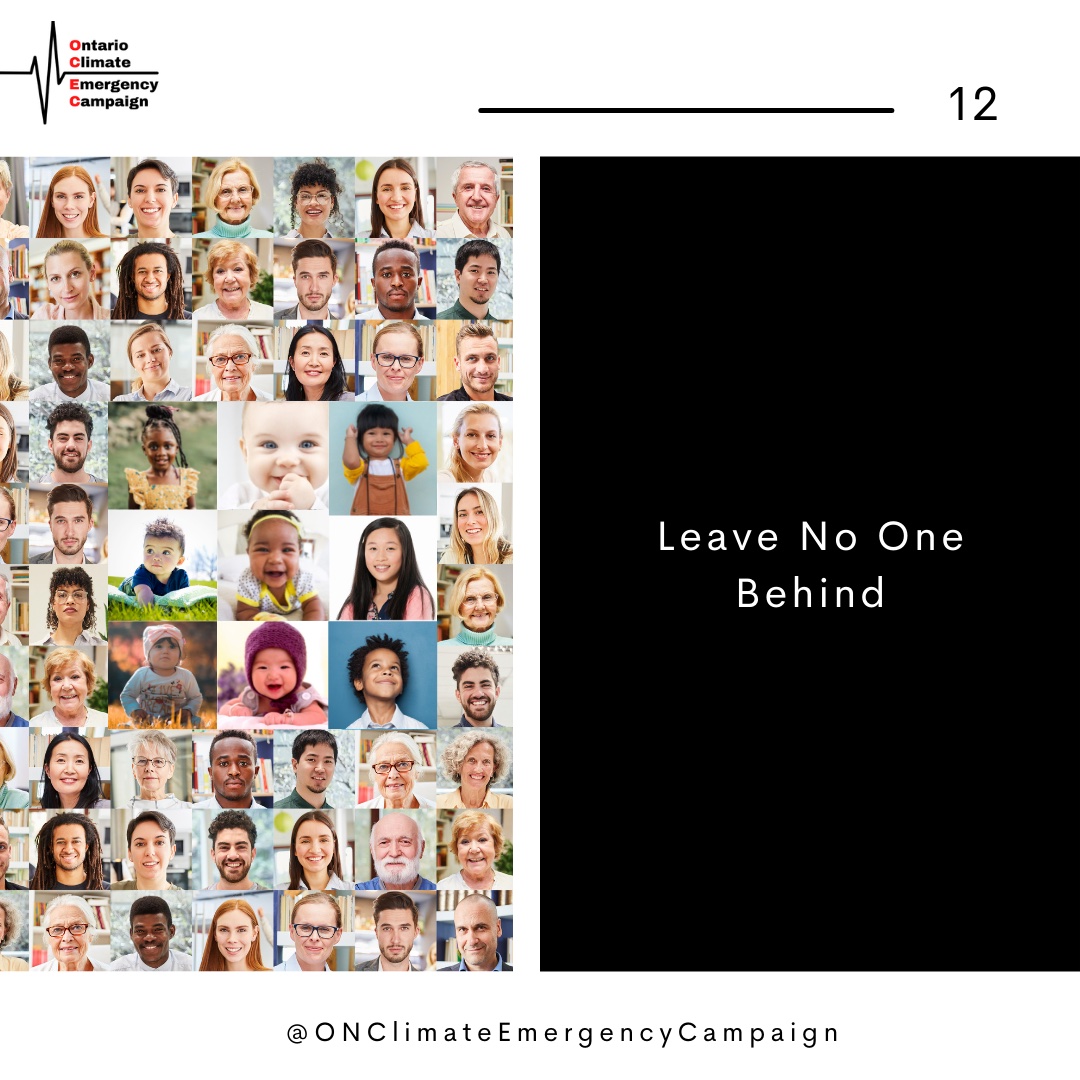