Today the partners involved in the cleanup of Randle Reef — the largest remediation project in the Canadian Great Lakes — highlighted the completion of Stage 2 of the contaminated sediment remediation which is removing over a century of contamination from Hamilton Harbour.

Minister of Environment and Climate Change, Steven Guilbeault, along with the Ontario Minister of the Environment, Conservation and Parks, David Piccini, and the Deputy Mayor of Hamilton, Jason Farr, were present to announce the successful completion of Stage 2 of the Randle Reef Remediation Project. This is a significant step to remove toxic substances and restore water quality and ecosystem health in the Hamilton Harbour Area of Concern.

“Today marks the completion of a major step in the cleanup of Randle Reef, with enough contaminated sediments removed and contained to fill a hockey arena three times,” said Minister Guilbeault. “Local residents will be happy to know that we are cleaning up the local harbour from the long legacy of industrial activity through a model of collaboration between many partners. Our Government will continue to invest in the protection and restoration of the Great Lakes and freshwater ecosystems across Canada.”

“It’s been a big undertaking and an important project. In fact, the approach of managing contaminated sediment in an engineered containment facility is a first in Canada,” pointed out Minister Guilbeault.

During Stage 2, over 615,000 cubic metres of contaminated sediment was managed. The sediment was primarily dredged and placed into an Engineered Containment Facility (ECF) constructed during the first stage, while the remaining contaminated sediment was capped in place. As part of the third and final stage of the project, scheduled to begin in fall 2022 and be completed by 2024, a multi-layered environmental top will be placed on the ECF as a final step to isolate contaminants.

Randle Reef is located in the southwest corner of Hamilton Harbour and covers approximately 60 hectares. In 1987, Hamilton Harbour was identified as an Area of Concern, as described under the Canada–US Great Lakes Water Quality Agreement.

The Randle Reef remediation project is a joint initiative involving the Government of Canada, the Province of Ontario, the City of Hamilton, Halton Region, the City of Burlington, Hamilton–Oshawa Port Authority, and Stelco. The $138.9-million cleanup is funded through a public‑private approach, with the federal government and the Province of Ontario each contributing a third of the funding and the remaining third collectively funded by local partners. The multi-year remediation plan, led by Environment and Climate Change Canada, focuses on removing and containing toxic sediment in the Reef area of the harbour, a legacy of the intense industrial and urban development around its shores dating back to the 1800s.

“Our support for the Randle Reef Project is integral to our efforts to create the prosperous and healthy future we all want to see for our province, with the Great Lakes continuing to serve as one of the foundations for the unparalleled quality of life we enjoy in Ontario. It’s a great legacy we can leave to future generations,” said Minister Piccini, who added that his grandfather was an employee at Stelco. “To be here two generations later for this unprecedented cleanup is exciting on a personal note.”

Lisa Hepfner, Member of Parliament for Hamilton Mountain, also remarked on her appreciation for the progress of the cleanup project. Prior to becoming an MP, she was a journalist. “As someone who has reported on and followed the cleanup of Randle Reef with great interest, I know how important this remediation is to the people of Hamilton, Burlington and beyond. I am thrilled to witness the completion of the dredging part of this process and look forward to a full environmental recovery of this area. This project is so important for the health of our waters, our communities and our economy.”

The Randle Reef Remediation project won a 2021 Brownie Award, in recognition of its exemplary investment partnership and collaboration for ecological regeneration of a contaminated brownfield site. The funding took shape through a shared vision to regenerate the harbour and agreement by multiple parties to contribute to the projected $138.9 million cost of the remediation, with $46.3 million in funding committed by the Government of Canada and the Province of Ontario and the remaining committed by the City of Hamilton, the City of Burlington, the Regional Municipality of Halton, the Hamilton Port Authority, and Stelco (formerly U.S. Steel Canada). 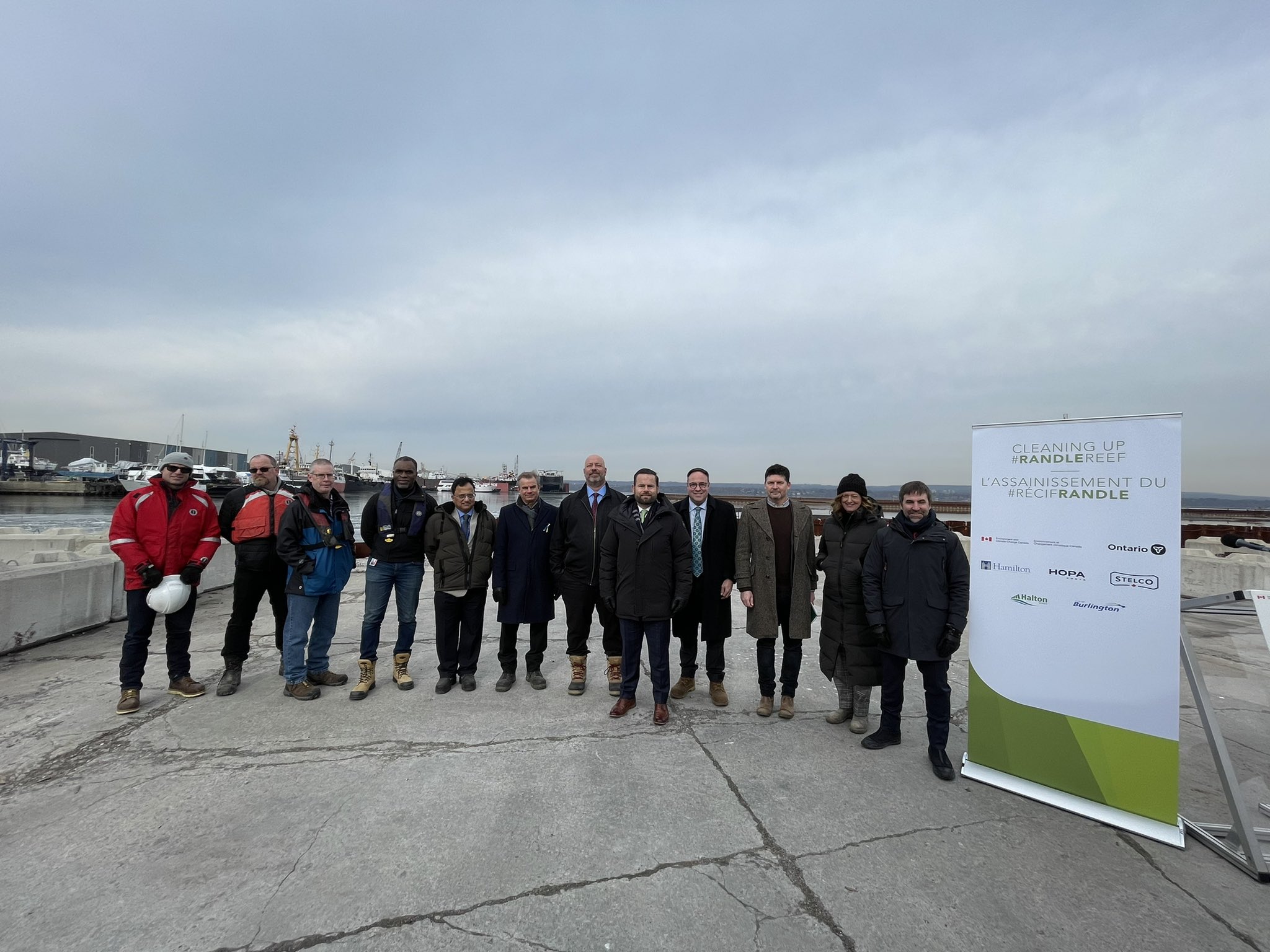 The Great Lakes are essential to the health and well-being of Canadians, ecosystems, and the economy. As one of the largest surface freshwater systems in the world, they provide water for 40 million people and are an economic driver for Canada.

Upon completion of the project, the Hamilton Oshawa Port Authority will accept ownership of the facility and be responsible for monitoring, maintaining, and developing the site as port facilities. The facility is expected to have a 200-year life span.

The Federal Contaminated Sites Inventory currently lists 23,663 sites, including 4,980 active sites of which 2,496 are categorized as priority sites for remediation. The program was expanded to allow more sites to be addressed that may impact Indigenous people living in Northern communities. The federal government is investing $1.16 billion over five years (2020 to 2024) in the program.

A water treatment plant was built on the #RandleReef project site to remove contaminants from #water before returning it to #HamiltonHarbour, a #GreatLakes #AreaOfConcern.

Check out how we treated water! pic.twitter.com/rZH3Vfi2Al

Excess Soils: Adapting to new policies on the horizon in British Columbia