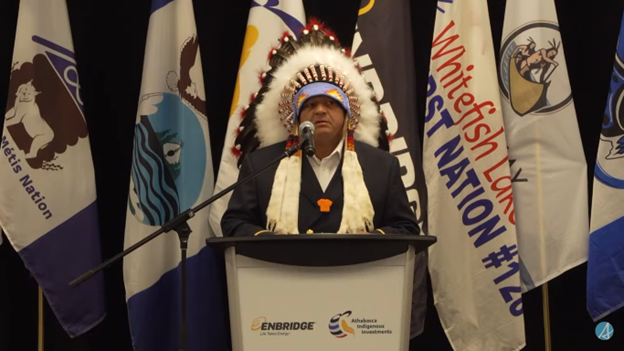 An energy partnership between Enbridge and 23 communities, called Athabasca Indigenous Investments, is the largest of its kind in North America. The major investment of $1.12 billion provides a long-term stream of income for Indigenous communities.

“Alberta’s government has a moral obligation to share in the bounty and prosperity of this land, which we can finally do through AIOC as a backstop of the government’s faith and credit,” said Jason Kenney, Premier of Alberta.

The Alberta Indigenous Opportunities Corporation (AIOC) began with a mandate to back secure investments in natural resource development projects, but that changed in February 2022 with an expansion into agriculture, telecommunications and transportation. The minimum investment threshold of $20 million remains in place to be sure projects are large enough to create significant and sustainable earnings for Indigenous communities.

“This project is exciting and historic in its scale. For all 23 Indigenous communities that are investing in these infrastructure assets, there is a more stable economic future ahead,” said Rick Wilson, Alberta’s Minister of Indigenous Relations.

AIOC can provide up to $1 billion of support to major Indigenous investments through loan guarantees and other financial tools. This project brings the total backing to $410 million since 2020.

“AIOC is immensely proud of our role in this historic transaction. When our corporation was created in late 2019, we set out to be a catalyst for Indigenous prosperity here in Alberta, and to see the work we have been able to accomplish in such a relatively short window is beyond exciting,” said Chana Martineau, CEO, Alberta Indigenous Opportunities Corporation. “This announcement represents everything we want to be known for – multi-generational projects that bring real economic prosperity to Indigenous and Métis communities in Alberta.”

Alberta Investing in Cleantech to Reduce Emissions and Create Jobs